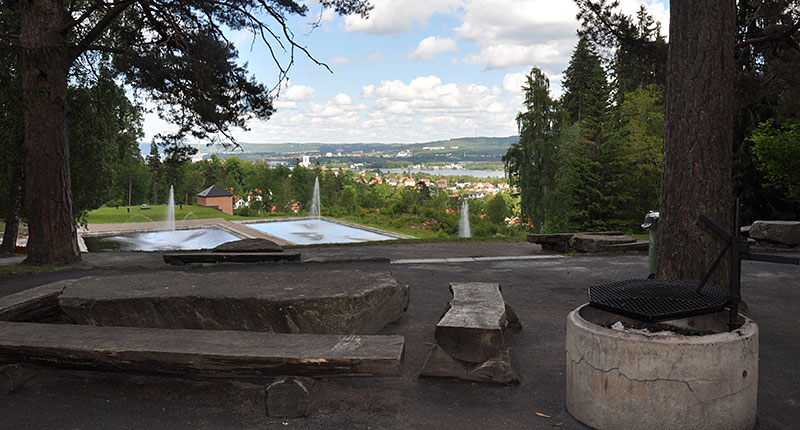 This recreation area of some 200 hectares has a varied nature. It is easily reached
from the city centre. The Water Reservoir Park (Vattenledningsparken) forms the main entrance to the area. The park gives fascinating views over the city and has beautiful and artistic playing fountains.

The Åsen dam in the centre of the park is of national interest as an historical heritage site. This water catchment was created in 1864 from the stream Junebäcken, and these water works were the third to be built in Sweden. Before this construction, lake Vättern was the main water supply, which had to be abandoned following the construction of the new railway line along the
lake shore. At the turn of the 19th century, Vattenledningsparken was a well-known tourist destination

At one time, the whole area consisted of felds, meadows and grazing land, except in the south, where the woods began. Large pine trees, oaks and groves of hazel were parts of this heavily
farmed landscape. During the 1900s, the open landscape gradually changed and became woodlands. Today, some typical meadow fowers and plants can still be found in glades
and on the edges of the woods. Devil’s-bit is common, as are cow-wheat, viper’s grass, harebell and peach-leaved bellfower. Aspen, some of which are very old, may be found growing near
former arable land. Large trees are important for the black woodpecker to peck in, which then provides desirable nestingholes for several smaller birds and mammals, as well as being
important habitats for rare insects.

Small waters and sources of springs

The woods in the nature area are varied, ranging from mixed woods on former pasturelands, to plantations of spruce. However, the most common species found are oaks interspersed with
spruce, birch and mountain ash. On rocky ground, there is a larger element of pine trees, and hazel dominates in the more fertile areas. Large trees with wide crowns and still standing are reminders of the former landscape. The area consists of broken ground with a large and steep north-to-south slope in its eastern part. The stream Junebäcken fows through a ravine and rift-valley which interrupts the steep slopes. The smaller slopes are characterised by populations of mature mountain ash. The woods on the large as well as the smaller slopes contain much dead wood, which supports a wide biodiversity of fungi, lichens and insects.

Many springs are a distinguishing feature of these woods located where the Småland Highlands border to the lower lying landscape surrounding lake Vättern. There are many treelined
small streams and brooks together with alder marshes which are interspersed with tree groves and spring sources. The wren is common here, particularly in areas of dense thickets. Another
inhabitant is the grey wagtail which can be seen by the dam’s small waterfall.